Join us as we reflect, educate, and remember.

This year marks the 25th anniversary of the Srebrenica genocide, in which over 8,000 Muslim men and boys were murdered in the worst atrocity on European soil since the Second World War, simply because of their religious identity. As an organisation that works with survivors of sexual violence, we believe that we must ensure that we never forget about the genocide and reaffirm our commitment to standing up against all forms of hatred and prejudice that targets groups based on their religion, ethnicity, gender, sexuality or any type of difference.

The theme “Every Action Matters” seeks to encourage every person to reflect upon their own behaviour and choices that they make, and demonstrate that however insignificant it may seem, every action matters, whether positive or negative. It aims to show that those who stand up and unite against hatred can make a difference. It sets out to dispel the notion that one person cannot make a difference and show that the action of one individual does matter and that they can achieve a great deal, however small their action may appear initially.

It is now more important than ever for us to come together as people in the UK, no matter what our background, to celebrate diversity and to stand together in solidarity against hatred and discrimination. We hope you will join us in mourning the loss of those who died at Srebrenica and reflecting on how we as individuals, groups and communities can come together to build a better future without hatred.

We remember the stories of the Mothers of Srebrenica and all the survivors who have fought tirelessly against genocide denial and for justice. Despite all that the Mothers of Srebrenica have been through, they have never sought vengeance and never acted with hatred as they regard hatred as a sign of weakness, and they refuse to be weak. Because of their actions, there has not been a single case of retribution against the Bosnian Serbs, with their actions paving the way for the chance of reconciliation.  Instead, they have chosen to campaign for justice, playing a pivotal role in the sentencing of many of the key architects of the genocide. They returned to their home determined to show the perpetrators that they had not succeeded.

Listen to the testimonies of Bosnian women: 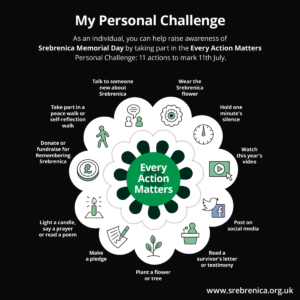 The theme for 2020 is ‘Every Action Matters’. The theme this year seeks to show that no matter how small an action may initially appear to be, each action really does matter and your participation will go a long way to helping raise awareness.  From reading a survivor’s story to lighting a candle, there are a number of simple options for you to choose from which will not take long to complete.